The Astral and Causal Spines

The astral nervous system channels the flow of life or prana in its five differentiated forms that in the physical body manifest as crystallization, circulation, assimilation, metabolism, and elimination. The main astral spine of light, the sushumna, has within it two other luminous spines. The sushumna, or outer covering of light, controls the gross function of the astral lifetrons (those associated with all the functions carried on by the seven astral spinal centers with their five vibratory creative elements—earth, water, fire, air, and ether) that create and sustain the physical body. The sushumna extends from the muladhara chakra, or coccygeal center, to the brain. Auxiliary to the sushumna are two astral nadis on either side of it —on the left, ida; on the right, pingala. These two, preeminent among 72,000 nadis, constitute the primary channels of the astral sympathetic nervous system—which, in turn, controls the corresponding sympathetic nervous system of the gross physical body.

Within the sushumna is the second astral spine called vajra, which provides the powers of expansion, contraction, and all activities of motion of the astral body. The vajra extends upward from the svadhishthana chakra, or sacral center. Within the vajra is hidden the chitra astral spine, which controls the spiritual activities (those related to consciousness). The activities of these three astral spines are controlled primarily by the astral brain or sahasrara of a thousand rays. Specific rays of life and intelligence from the thousand-petaled lotus of light are directly reflected in the different astral spinal centers, giving each its characteristic activities and consciousness, just as portions of the physical brain are connected to specific nerves and nerve centers in the physical spinal plexuses.

Structure of the astral and causal spines

As the physical body is made principally of flesh, and the astral body of prana, intelligent light or lifetrons, so the causal body is made specifically of consciousness, ideas, which I have termed "thoughtrons." It is the presence of the forces of the causal body behind the astral and physical bodies that causes and sustains their very existence and makes man a conscious, sentient being. The causal body has a spiritual brain of wisdom, and a spiritual spine called the brahmanadi. The brahmanadi has no covering of light as does the threefold astral spine; it is made of a strong current of consciousness. The brahmanadi is commonly described as inside, or the inside, of the chitra astral spine. This is at once both a fact and a misnomer. The brahmanadi, being the "spine" of the causal body, which is thought vibrations or consciousness, can only be described in relative terms as being "inside" or covered by the three astral spines, which in turn are covered by the spine of the physical body The "forms" of the three bodies and their "spines" are a matter of degree of grossness superimposed on one another, with the finer obscured by the grosser, though not obstructed by it. The physical, astral, and causal instruments of the soul exist and function as an integrated whole through interaction between the various gross and finer forces.

Within the causal cerebrospinal "channel," or brahmanadi, are seven spiritual centers of consciousness, corresponding to the subtle centers of light and power in the astral body The physical, astral, and causal bodies are knitted together at these centers, uniting the three bodies to work together: a physical vehicle, empowered by astral life, with causal consciousness providing the power to cognize, think, will, and feel.

As this consciousness flows outward from the causal body into the astral body, and then into the physical body, drawn by the magnetism of sense attachment to matter, the fine expression of original cosmic consciousness becomes increasingly deluded and gross, losing its true Spirit nature. Pure blissful intelligence, or wisdom, becomes discrimination. Discrimination distorted by the limitations of sense impressions becomes the blind whim-led mind. Expressing even more grossly, mind becomes life without cognizing power. Life becomes inert matter. (Chapter I, God Talks With Arjuna: The Bhagavad Gita by Paramahansa Yogananda)

O Partha ("Son of Pritha,” Arjuna), surrender not to unmanliness; it is unbecoming to thee. O Scorcher of Foes, forsake this small weakheartedness! Arise!
—The Bhagavad Gita II:3

The word arise is well chosen. With this command, taken literally, Krishna seeks to rouse Arjuna to positive dutiful action befitting his true soul nature. The key to the deeper spiritual implication is in the epithet scorcher of foes, reference to Arjuna as symbolizing the power of the fire element in the lumbar center, or manipura chakra. Life energy and consciousness flowing downward and outward from this chakra energize the two lower centers; these three centers then become associated with all sentient body consciousness. When instead, by the power of Arjuna or self-control in the lumbar center, the fire energy is turned upward, concentrating life and consciousness in the higher centers, the whole being becomes spiritualized. (...)

The materialistic man identifies his consciousness with these outer sensibilities. The devotee does away with "living on the skin surface"; he is tired of gambling with sense pleasures! He withdraws his consciousness from the coccygeal, sacral, and lumbar plexuses, which control the lower sense inclinations, into the dorsal and cervical centers, or roams even further, into the high Christ center.

The dorsal is the divine-love and life-energy-control center; the cervical is the oceanic vibratory and divine-calmness center; the Krishna, or Christ, Center (the Kutastha, at the point between the eyebrows) is a focus for the Kutastha Chaitanya or Christ Consciousness, which is the Intelligence—the reflection of Spirit—within every atom of creation and circumambient space. (Chapter II, God Talks With Arjuna: The Bhagavad Gita by Paramahansa Yogananda) 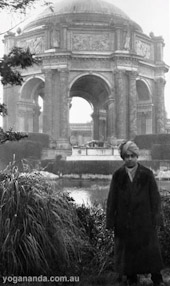