Realize that you are not really a fleshly being; neither categorize yourself as a Hindu nor as an American, or any other conception you may have of yourself that is limiting and sense-bound. It is wrong to say that we are mortals when we are essentially immortal. It is the truth that we are gods, and it is wrong to call ourselves weaklings.

You are an image of God;

But what happens? First thing in the morning you lose your temper and complain, "My coffee is cold!" What does it matter? Why be disturbed by such things?

"If therefore thine eye be single, thy whole body shall be full of light."* Long concentration on the liberating spiritual eye has enabled the yogi to destroy all delusions concerning matter and its gravitational weight; he sees the universe as the Lord created it: an essentially undifferentiated mass of light. [* Matthew 6:22] (aoy)

Your trials may be heavy, may be great, but the greatest enemy of yourself is yourself! You are immortal; your trials are mortal; they are changeable; you are unchangeable. You can unleash eternal soul powers and shatter your trials.

You are not a mortal being. You are an immortal, made in the image of God. Never let anyone call you a sinner. No matter what you were yesterday, you are a child of God now and evermore. God made you in His image.

Awake! Arise from dreams of littleness to the realization of the vastness within you. God is hidden in everything. Come! I will show you that you are a spark of the Eternal Fire that is drinking with countless mouths the Bliss-nectar honeycombed in the heart of all created things.

You are, and ever will be, a perfect reflection of Spirit. You were Spirit; now you imagine yourself to be mortal; but by meditation on your true Self, and by performing God-reminding actions constantly, you can remember your forgotten Spirit-nature and remain in that consciousness through all futurity. Since you are immortal, do not burden yourself with earthly limitations.

That free and unconditioned consciousness, which all men briefly experience in certain of their dreams, is the permanent state of mind of a God-tuned master. Innocent of all personal motives, and employing the creative will bestowed on him by the Creator, a yogi rearranges the light atoms of the universe to satisfy any sincere prayer of a devotee.

"And God said, Let us make man in our image, after our likeness: and let them have dominion over the fish of the sea, and over the fowl of the air, and over the cattle, and over all the earth, and over every creeping thing that creepeth upon the earth."*

For this purpose were man and creation made: that he should rise up as master of maya, knowing his dominion over the cosmos. [*Genesis 1:26] (aoy)

Ego is the sensualization of super-consciousness or subjective soul—the identifying of the superconscious soul with the sense-bound consciousness of the body. Ego is the pseudosoul, described also as the shadow of the soul. It is the reflected, subjective consciousness within man that makes him conscious of his feelings, will, cognition (sensation, perception, conception), and his environment.

It is the conscious nucleus of "I-ness" around which all human thoughts, feelings, and experiences revolve. All of these may be subtracted from the ego, but still the ego itself would remain—aloof, always beyond reach, like the will-o'-the-wisp; seemingly beyond the power to define it, except to explain what it is not. Hence negatively defined, the ego or "I"—the subject—is that which cannot be eliminated from myself as can everything else with which the "I" thinks that it is identified.

The aloofness of the ego is only superficial, however, and is different from the soul's aloofness and power of transcendental indifference. The ego cannot maintain its self-conscious expression without its titles; indeed, the ego defines itself by these identifying marks. The ego's titles are amassed from its accumulation of experiences and traits, and are thus constantly changing, even as its bodily instrumentation undergoes metamorphosis: The child changes into a youth, the youth grows and passes through adolescence into adulthood, and the adult progresses into old age. (bg) 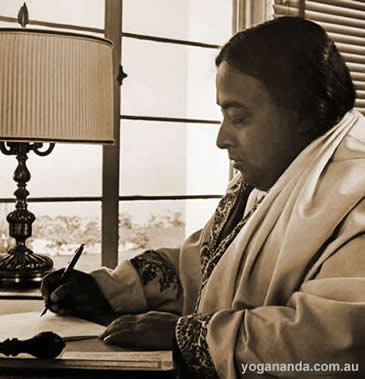