The Bhagavad Gita emphasizes the following qualities of the Self (soul):

It is unborn, though born in a body;

it is eternal, though its bodily dwelling is impermanent;

it is changeless, though it may experience change;

it is ever the same, though in the long pathway of reincarnation which ultimately leads to God,

the soul appears in countless forms;

the soul is not slain when the body dies; and even when the soul returns to Spirit, it does not lose its identity, but will exist unto everlastingness.

"A soul, being invisible by nature, can be distinguished only by the presence of its body or bodies."

The Soul is the Reflection of Spirit

The soul, in essence the reflection of Spirit, never undergoes the pangs of birth nor the throes of death. Nor having once been projected from the womb of immortal Spirit will Prince Soul, on return to Spirit, lose its individuality; having entered the portals of nativity, its existence will never cease. In all its bodily births, the Spirit-soul never felt birth; it exists everlastingly, untouched by the maya-magic fingers of change. It is ever the same—now, past, future—as it has always been; ageless, unchanged, since its immemorial beginnings. The deathless soul dwelling in the destructible body is ever constant through all cycles of bodily disintegrations; it does not taste death even when the body quaffs that fatal cup of hemlock.

Souls are the radiating rays of Spirit, individualized as formless, vibrationless "atoms" and "tissues" of Spirit. Hence, they are coexistent with Spirit and of the same essence, as the sun and its rays are one. Though incarnate, the soul belongs to the noumenal region, which changes not. All material forms belong to the regions of phenomena; their very nature being alienated from Spirit, they change constantly. Phenomena arise from and are inseparably linked with noumena; but the latter, being of Spirit, are immutable and transcendent. The outer surface of the soul's consciousness that is cloaked with the instrumentalities of the ego, mind, and senses undergoes the permutations of Nature, but the soul's essence remains inviolable. (God Talks With Arjuna: The Bhagavad Gita by Paramahansa Yogananda p.211)

The Soul is Immortal

He who considers the Self as the slayer; he who deems that it can be slain: neither of these knows the truth. The Self does not kill, nor is it killed.
—The Bhagavad Gita II:19

Just as the dying hero on a motion picture screen has not really been slain, so the soul of man, playing a role in the cosmic motion picture of life, is ever living. The victim and the killer in the screen drama are only two forms of electric shadows. The villain of the screen, and the villain of Death, alike kill no one! ...

The quantity of water contained in ocean waves remains the same whether the waves play on the sea breast or lie hidden beneath it. Similarly, the soul-waves of life remain constant whether they play on the surface of the sea of life or rest deep within its bosom.

This stanza expresses the profound truth of the immortal nature not only of the soul but of matter. As a reflection of Spirit, even matter is indestructible. The essence of matter is never destroyed; the human body, made of patterns of condensed electrons that are superficially changed by death, is in reality never annihilated.

Every form, thought, motion that has been exhibited on the screen of time and space is recorded permanently. These cosmic motion pictures—and they were never more than that, portrayed by immortal souls—are preserved in the Infinite Archives. Those God-realized souls who earn entrance into the secret vaults of Spirit knowthe wonder of this mystery of immortality. (God Talks With Arjuna: The Bhagavad Gita by Paramahansa Yogananda p.210)

"Man as an individualized soul is essentially causal-bodied," my guru [Sri Yukteswar] explained. "That body is a matrix of the thirty-five ideas required by God as the basic or causal thought forces from which He later formed the subtle astral body of nineteen elements and the gross physical body of sixteen elements.

The nineteen elements of the astral body are mental, emotional, and lifetronic. The nineteen components are intelligence; ego; feeling; mind (sense-consciousness); five instruments of knowledge, the subtle counterparts of the senses of sight, hearing, smell, taste, touch; five instruments of action, the mental correspondence for the executive abilities to procreate, excrete, talk, walk, and exercise manual skill; and five instruments of life force, those empowered to perform the crystallizing, assimilating, eliminating, metabolizing, and circulating functions of the body. This subtle astral encasement of nineteen elements survives the death of the physical body, which is made of sixteen gross chemical elements."

"The fleshly body is made of the fixed, objectified dreams of the Creator. The dualities are ever present on earth: disease and health, pain and pleasure, loss and gain. Human beings find limitation and resistance in three-dimensional matter. When man's desire to live is severely shaken by disease or other causes, death arrives; the heavy overcoat of the flesh is temporarily shed. The soul, however, remains encased in the astral and causal bodies. The cohesive force by which all three bodies are held together is desire. The power of unfulfilled desires is the root of all of man's slavery.

Physical desires are rooted in egotism and sense pleasures. The compulsion or temptation of sensory experience is more powerful than the desire-force connected with astral attachments or causal perceptions."

"A soul, being invisible by nature, can be distinguished only by the presence of its body or bodies. The mere presence of a body signifies that its existence is made possible by unfulfilled desires.*

*"And he said unto them, Wheresoever the body is, thither will the eagles be gathered together."—Luke 17:37. Wherever the soul is encased in the physical body or in the astral body or in the causal body, there the eagles of desires—which prey on human sense weaknesses, or on astral and causal attachments—will also gather to keep the soul a prisoner.

So long as the soul of man is encased in one, two, or three body-containers, sealed tightly with the corks of ignorance and desires he cannot merge with the sea of Spirit. When the gross physical receptacle is destroyed by the hammer of death, the other two coverings—astral and causal—still remain to prevent the soul from consciously joining the Omnipresent Life. When desirelessness is attained through wisdom, its power disintegrates the two remaining vessels. The tiny human soul emerges, free at last; it is one with the Measureless Amplitude." (Chapter 43, Autobiography of a Yogi by Paramahansa Yogananda)

God originated, in the form of the causal body, thirty-five ideas as the matrix of human creation. These ideas are the basic or thought forces required to create the astral and physical body. Nineteen of these ideas were manifested as the subtle astral body, which contains the ten senses; the five life forces; and the ego, feeling, mind, and intelligence. The remaining sixteen ideas were converted into the gross physical body of sixteen basic elements. In other words, before God created the physical body consisting of iron, phosphorous, calcium, and so forth, and the subtle astral body of lifetronic composition, He had first to project them as ideas, the constituents of the causal body. Each of the three bodies has its distinguishing qualities. The dense physical body is the result of solidified vibrations, the astral body of energy and mind vibrations, and the causal body of nearly pure vibrations of Cosmic Consciousness.

The physical body may be said to be dependent on food; the astral body is dependent on energy, will, and evolution of thought; the causal body is dependent on the ambrosia of wisdom and bliss. The soul is encased in these three bodies. At death the physical body is destroyed. The other two bodies, astral and causal, are still held together by desires and by unworked-out karma. The soul, wearing these two bodies, repeatedly reincarnates in new physical forms. When all desires are conquered by meditation, the three body-prisons are dissolved; the soul becomes Spirit. (Chapter II, God Talks With Arjuna: The Bhagavad Gita by Paramahansa Yogananda)

The Soul is the Silent Witness

He who sees that all actions are performed in their entirety by Prakriti alone, and not by the Self, is indeed a beholder of truth.
—The Bhagavad Gita XIII:29

The true seer perceives his soul as the silent witness, aloof from the body—the microcosm created by the cosmic vibratory force, Prakriti or Mother Nature. She alone is the performer of all physical and mental activities. The soul is actionless, the reflection of the transcendental, nonvibrational God the Father beyond creation. (Chapter XIII, God Talks With Arjuna by Paramahansa Yogananda) 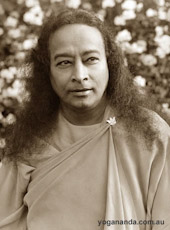