The devotee who sits in a good posture and meditates at the point between the eyebrows learns to practice yoga, the uniting of ego and soul; in deep concentration, he finds his mind and heart (chitta, feeling) free from sensory distractions and emotional likes and dislikes.

Meditation is the science of God-realization. It is the most practical science in the world. Most people would want to meditate if they understood its value and experienced its beneficial effects. The ultimate object of meditation is to attain conscious awareness of God, and of the soul's eternal oneness with Him. What achievement could be more purposeful and useful than to harness limited human faculties to the omnipresence and omnipotence of the Creator? God-realization bestows on the meditator the blessings of the Lord's peace, love, joy, power, and wisdom.

Meditation utilizes concentration in its highest form. Concentration consists in freeing the attention from distractions and in focusing it on any thought in which one may be interested.

Meditation is that special form of concentration in which the attention has been liberated from restlessness and is focused on God.

In response to the love of great devotees, God has manifested Himself in various cosmic forms. He also manifests Himself in truth, in divine qualities, in the creative power and beauty in nature, in the lives of great saints and avatars (divine incarnations), and in the soul of every man. Thus meditation on any of these concepts brings a deep realization of the omnipresent Absolute, of Him who is ever-existing, ever-conscious, ever-new Bliss. And because meditation gives direct perception of God, it raises the practice of religion above the differences of dogma. 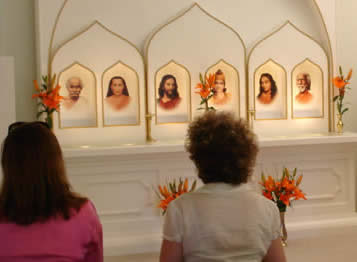 Meditation—concentration upon God—is the portal through which every seeker of every faith must pass in order to contact God. Withdrawal of the consciousness from the world and the senses for the purpose of communing with God was taught by Christ in these words: "But thou, when thou prayest, enter into thy closet (draw the mind within), and when thou hast shut thy door (the door of the body and senses), pray to thy Father which is in secret (within you)" (Discourse 12)

Free from ever-hoping desires and from cravings for possessions, with the heart (waves of feeling) controlled by the soul (by yoga concentration), retiring alone to a quiet place, the yogi should constantly try to unite with the soul.
—The Bhagavad Gita VI:10

The aspirant who meditates without eliminating desires and hopes (instigators for actions of sensory enjoyment and possession) finds his mind roaming into the realm of materiality, planning for and visualizing various gains. So when the yogi starts to meditate, he must leave behind all sensory thoughts and all longings for possessions by quieting the waves of feeling (chitta), and the mental restlessness that arises therefrom, through the application of techniques that reinstate the controlling power of the untrammeled superconsciousness of the soul.

The yogi's seat, in a clean place, should be firm (not wobbly), neither too high nor too low, and covered, first, with kusha grass, then with a deer or tiger skin, then with a cloth.
—The Bhagavad Gita
VI:11

In the modern world, in both East and West, neither kusha grass nor animal skin is necessary for the meditation seat. (In India it was customary for a forest-dwelling yogi to make his seat on the skin of a tiger or leopard or deer that had died a natural death.) A very satisfactory substitute is a seat made of a folded woolen blanket, with a silk cloth placed over it. Silk repels certain earth currents better than does cotton.

The yogi should meditate on a firm seat, one that is clean—untainted by dirt or unspiritual vibrations of others. The thought or life force emanating from an individual saturates the objects he uses and his dwelling.

The proper bodily posture, one which produces calmness in body and mind, is necessary to help the yogi shift his mind from matter to Spirit. (see posture in verse 13.)

As the parlor awakens social consciousness, the library fosters reading consciousness, and the bedroom suggests sleeping, so everyone should have a room or a screened-off corner, or a well-ventilated closet, used exclusively for the purpose of silent meditation. (Discourse 28)

In this stanza the Gita points out that, during the effort of being one-pointed, the yogi will be unsuccessful unless he can by concentration withdraw his attention (manas, mind) from the activities of the life force in the various senses. Otherwise, he will be constantly distracted by restless thoughts—the mental concepts formed from sensory stimuli by the "fanciful faculty" of feeling (chitta). The devotee who sits in a good posture and meditates at the point between the eyebrows learns to practice yoga, the uniting of ego and soul; in deep concentration, he finds his mind and heart (chitta, feeling) free from sensory distractions and emotional likes and dislikes. With the mergence of the ego into the taintless soul, he engages in the ultimate "self-purification." (p.607)

In the concentrated state of superconsciousness, that angle of vision is at the point between the eyebrows (the natural seat of will and concentration, and of divine perception, in the body). The aspirant who wants to produce the superconscious state, characterized by conscious relaxation of life energy from the senses, must learn to fix his eyes and their gaze at this center. When the gaze of the two eyes is concentrated at the point between the eyebrows, the dual currents flowing from the medulla into the two eyes reunite, and the yogi sees at this center the spiritual eye of three colors—a reflection of the actual luminous eye in the medulla oblongata. (...)

It requires time and calm practice to steady the light of the intuitive astral eye. It takes deeper and longer practice to see the star. It requires greater realization to hold the perception of the star. And it takes mastery in meditation to march the consciousness, valiantly triumphant, through the starry gate of light. (...)

By deeper concentration and meditation, the spiritual eye of intuition opens, and through the wisdom star the yogi becomes united to the Christ-Krishna Omnipresence; and thence, in deepest ecstasy, he reaches the Cosmic Consciousness of Spirit. (p.612) 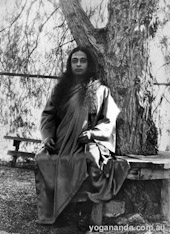