The sanskrit term for God is Sat-Chit-Ananda:
— eternal Being or Truth (Sat),
— infinite Consciousness (Chit),
— and ever new Bliss (Ananda).

Ever-existing means that He is eternal; ever-conscious means He is always conscious of His eternal existence; and ever-new Bliss means that He is a joy that never grows stale. Every human being is seeking that kind of experience.

Man's rationalizing mind cannot conceive God as the Nameless Absolute; but He is comprehensible in the concept of a triune nature consisting of consciousness, existence, and divine love or bliss.

2. Existence: cosmic will expressing as the objectification of life and all manifestation;

3. Bliss (divine love): Love perfected is bliss. Bliss, love, and beauty —these terms synonymously complement one another. Beauty is the harmonious manifestation of love; the perfection of love is bliss.

God is Sat-Chit-Ananda, ever-existing, ever-conscious, ever-new Bliss. We, as soul, are individualized Sat-Chit-Ananda. "From Joy we have come, in Joy we live and have our being, and in that sacred Joy we will one day melt again." (Taittiriya Upanishads 3.6.1) All the divine emotions—love, compassion, courage, self-sacrifice, humility— would be meaningless without joy. Joy means exhilaration, an expression of the ultimate Bliss. (How to Cultivate Divine Love by Paramahansa Yogananda)

The reason that God remains unknown to millions who worship Him in temples and churches, and in holy cities and places of pilgrimage, is that the physical instruments of knowledge can apprehend only the products of the Creator; Divinity Itself is perceived by the supramental faculty of intuition, the soul's God-given power of knowing truth. When mental restlessness is stilled and the consciousness is interiorized, in touch with the soul, the God-revealing intuitive faculty is awakened.

God, in relation to the soul, presumes a duality—the Object to be perceived, God; and the perceiver or experiencer, the soul. The spiritually awakening man seeks some familiarity, some tangibility, in his relationship with his Creator. He begins by personalizing God's Presence. In the Bhagavad Gita, the Lord promises: In whatever way people are devoted to Me, in that of measure I manifest Myself to them. All men, in every manner (of seeking Me), pursue a path to Me. —The Bhagavad Gita IV:11.

The kingdom of God is not in the clouds, in some designated point of space; it is right behind the darkness that you perceive with closed eyes.

This Joy is omnipresent. Feel your oneness with that Joy. It resides within you; and it encompasses infinity. Beyond the gross vibratory boundaries of matter, the Immutable Infinite reigns in all His majesty and vastness.

Creation exists, and is caused by God; therefore God exists. We can say that intelligent creation exists because of an intelligent God. But who created God, out of whom all things else have come? The Infinite Himself, t The law of causation applies only to finite objects; it does not apply to the Infinite. As all waves on the ocean become dissolved in the ocean, so all finite objects manifesting from the aforesaid finite causes lose themselves in their Eternal Source. Similarly, the law of causation operates outwardly in creation, but is lost in the Infinite.

I, the Unmanifested, pervade the whole universe. All creatures abide in Me, but I do not abide in them.
—The Bhagavad Gita IX:4

Though present in all things, God is in no way bound by finitude. ...

The Infinite, beyond the categories of vibratory intelligence, energy, space, and time, is thus a thing in Itself. It can be felt and known as the eternal Power that exists without a beginning or end. Creation is caused by God, but God simply is. No one, nothing made God—He has been and will be what He is forever and forever.

O Arjuna! there is nothing higher than Me, or beyond Me. All things (creatures and objects) are bound to Me like a row of gems on a thread.
—The Bhagavad Gita VII:7

This cannot be understood so long as you consider yourself a created being, subject to laws of cause and effect. But as soon as you become one with God in ecstasy, you will know exactly how and what God is—Beginningless, Endless, Causeless. Then, being one with Him, you will know that you too are the Causeless Eternal. As a mortal man you are a creation made by God; as an immortal man of realization, you will know yourself as a wave in the ocean of God, the one and only, self-sustaining, ever-existing Cosmic Consciousness. (Man's Eternal Quest p.360)

There are ten principal manifestations of God by which the devotee may know that God has revealed Himself. First among them is the expression of

This in turn manifests as

Any devotee who in meditation beholds not just glimmers of light but the brilliant overspreading Cosmic Light—or the luminous tricolored spiritual eye which epitomizes Cosmic Vibration, Christ Consciousness, and Cosmic Consciousness—assuredly has God-contact.

Cosmic Light may also take the form of some personal aspect of Deity; or, out of that Light the great ones—such as Jesus, Krishna, Buddha, the God-knowing masters and saints—may manifest themselves unto the devotee who is deeply in tune.

One who contacts God as Cosmic Intelligence knows the infinity of Christ Consciousness and perceives the working of the divine laws of order and harmony that govern all creation.

In Cosmic Wisdom, manifested Intelligence or Truth, one may set aside the study of books; he receives all knowledge through the direct perception of the intuition of his soul.

When God manifests as Cosmic Devotion, the devotee is absorbed in sweetest divine longing for and reverential worship of the Lord as Father, Mother, Friend, or in some other ideal relationship.

In the manifestation of Cosmic Love, the devotee and God merge as one in unending thrills of ecstasy—the love of millions of human loves combined—expanding the devotee's heart to hold the Infinite Love that unites all creation.

Any devotee who feels God as Cosmic Peace (usually experienced in the first contact with Aum, the Comforter), as Cosmic Calmness ("Be still, and know that I am God"), or as intoxicating ever new Cosmic Bliss—or as any of the ten manifestations singly or in combination—can be certain that he is contacting God.

Steadfast practice of meditation techniques of communion with Aum opens the portal to unending realizations of God-consciousness. Communion with Aum is the best way to worship a personal concept of God (any specific manifestation of the Unmanifested Absolute). To focus one's worship on an image or mentally conceived depiction of God in form is to limit the Illimitable unless the devotee also includes communion with Aum, the vibratory manifestation out of which emerge all "forms" of the Divine Presence. Continuous meditation on Cosmic Aum expands one's consciousness in that all-pervading Vibration, attuning the devotee to the omniscience and omnipresence of God reflected therein, revealing the Infinite in His cosmic forms and aspects, and bestowing realization of Spirit as Satchitananda: ever-existing, ever-conscious, ever-new Bliss. (The Second Coming of Christ by Paramahansa Yoganandam p.1059)

Is God a Father or Mother?

Thus, it is a misnomer to refer to God always as "He." It is equally appropriate to call God "She." But in the ultimate, God is Spirit, neither masculine nor feminine. Spirit is above any human correlation. Similarly, the soul is neither male nor female, though karmic inclinations cause it to incarnate either with the body of a man or a woman. Any personalized communion with God or worship of a conceptualized aspect or attribute of Divinity maintains the duality of worshiper and Worshiped, the ecstatic relationship sometimes preferred by saints. But the even higher state referred to by Jesus, beyond dualistic devotion, is Oneness with the Object of worship, and specifically, the ultimate union: oneness of the soul with Spirit. God as Spirit, the Absolute, beyond form, qualities, manifestations, cannot be perceived, but only experienced by the supreme realization of Spirit and soul union. This ecstasy, a supernal Bliss that no human tongue can tell or rational thought conceive, is described simply by India's rishis: "He who knows, he knows; naught else knows." ...

It is only by worshiping God and His presence in Nature, and then by worshiping God as unmanifested Spirit, by Spirit-and-soul union, that the devotee reaches the final state of emancipation, from which there is no fall. (The Second Coming of Christ by Paramahansa Yogananda, p.310) 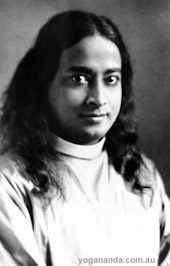