By the right method of meditation on the Holy Ghost as the light of the spiritual eye and the holy sound of the cosmic vibration of Aum (Om), any persevering devotee, by constant practice, can experience the blessings of the manifested vibratory presence of God. The Sacred Vibration, the Great Comforter, being imbued with the universal, reflected God-consciousness, contains the all-encompassing bliss of God. On the day of Pentecost the disciples of Jesus were filled with the new wine of this Joy coming from the touch of Aum, the comforting Holy Vibration, and they could talk "in diverse tongues." Aum, the Word, the cosmic intelligent Vibratory Sound, is the origin of all sounds and languages. One filled with the Holy Ghost—one who can hear, feel, and spread his consciousness in Aum—can understand and communicate in the diverse tongues of inspirations of men, animals, and atoms. He truly communes with Nature; not as an experience of the senses, but as one united with the Voice of God through which the Creator guides the symbiosis of His beings in an underlying harmony.

All human beings are born of the Creative Vibration of the Holy Ghost; but they are prodigal sons who have left the home of their parental Divine Consciousness and have identified themselves with the finitely limited territory of the human body. The soul feels confinement in the physical, astral, and ideational bodies. At the onset of spiritual awakening, that Self begins to assert its connate desire for freedom from delusion's constraints. The conscious mind should then be taught how to detach the soul consciousness from identification with these three bodies to reclaim its origin in the omnipresent Spirit.

By a guru-given technique of meditation on Aum (Om), such as I have taught to Self-Realization Fellowship students, the sacred Aum vibration of the Holy Ghost can be heard in meditation through the supersensory medium of intuition. First, the devotee realizes Aum as the manifested cosmic energy in all matter. The earthly sounds of all atomic motion, including the sounds of the body—the heart, lungs, circulation, cellular activity—come from the cosmic sound of the creative vibratory activity of Aum. The sounds of the nine octaves perceptible to the human ear, as well as all cosmic low or high vibrations that cannot be registered by the human ear, have their origin in Aum. So also, all forms of light—fire, sunlight, electricity, astral light—are expressions of the primal cosmic energy of Aum.

This Holy Vibration working in the subtle spinal centers of the astral body, sending forth life force and consciousness into the physical body, manifests as wonderful astral sounds—each one characteristic of its particular center of activity. These astral sounds are likened to melodic strains of the humming of a bee, the tone of a flute, a stringed instrument such as a harp, a bell-like or gong sound, the soothing roar of a distant sea, and a cosmic symphony of all vibratory sound. The Self-Realization Fellowship technique of meditation on Aum teaches one to hear and locate these astral sounds. This aids the awakening of the divine consciousness locked in the spinal centers, opening them to "make straight" the way of ascension to God-realization.

These progressively higher states of realization are attained through deeper and longer meditation as guided by the guru. But from the very beginning, the blessings of contact with Aum become increasingly manifest.

The uplifting vibrations of "the Comforter" bring profound inner peace and joy. The Creative Vibration vitalizes the individual life force in the body, which conduces to health and well-being, and can be consciously directed as healing power to those in need of divine aid. Being the source of intelligent creativity, the Aum vibration inspires one's own initiative, ingenuity, and will.

Baptism in the vibration of the Holy Ghost loosens the hold of bad habits and wrong desires, and aids in the establishment of good habits and desires—ultimately transmuting desire itself into a singlehearted attraction to blessed contact with God. To know God is not the negation of desires, but rather complete fulfillment. Just as by feeding somebody else one's own hunger cannot be appeased, so the soul can never be satisfied by catering to the senses. The senses crave indulgence, greed, and temptations to excite and amuse them; the soul feels fulfilled only by the calmness, peace, and bliss bestowed by meditation and the moderate use of the sensory instruments.

Ambition for good things, noble achievements, and spiritual work, serving the many, should be instituted to displace selfishness and greed, and the limiting circumscription of sole consideration for one's self and one's immediate family. When undertaken in the thought of God, there is great enjoyment in all good work and achievements.

By contacting God in the world and in meditation, all desires of the heart are fulfilled; for nothing is more worthwhile, more pleasant or attractive than the all-satisfying, ever-new joy of God.

Desire limits the consciousness to the object of desire. Love for all good things as expressions of God expands man's consciousness. One who bathes his consciousness in the Holy Ghost becomes unattached to personal desires and objects while enjoying everything with the joyousness of God within.

In deepest meditation, as practiced by those who are advanced in the technique of Kriya Yoga, the devotee experiences not only expansion in the Aum vibration "Voice from heaven," but finds himself able also to follow the microcosmic light of Spirit in the "straight way" of the spine into the light of the spiritual eye "dove descending from heaven."

First, the life force and consciousness must be withdrawn from the senses and bodily restlessness, and must cross the portals of Cosmic Energy represented by the golden ring of the spiritual eye. Then the consciousness must plunge in the blue light representing Christ Consciousness. Then it must penetrate through the silver star opening into Spirit, in the boundless region of Infinity. This golden, blue, and silver light contains all the walls of rays—electronic, atomic, and lifetronic —of Cosmic Vibration through which one has to penetrate before one can reach heaven.

In these highest states of meditation, the body itself becomes spiritualized, loosening its atomic tenacity to reveal its underlying astral structure as life force. The aura often depicted around saints is not imaginative, but the inner divine light suffusing the whole being. By deeper meditation still, the astral body becomes elaborated into ideational body of consciousness. Then as pure wisdom the ideational consciousness transcends the vibrations of the Holy Ghost and becomes immersed in Christ Consciousness, through which it ascends to Cosmic Consciousness, the bosom of God the Father. (The Second Coming of Christ by Paramahansa Yogananda, p. 123-125)

If you would like to learn the Aum meditation technique please apply for the Self-Realization Fellowship Lessons. The technique of meditation on Aum (Om) is taught as preparatory to Kriya Yoga. 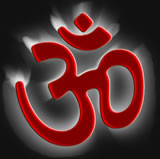