In this path (of yoga action) there is no loss of the unfinished effort for realization, nor is there creation of contrary effects. Even a tiny bit of this real religion protects one from great fear (the colossal sufferings inherent in the repeated cycles of birth and death).
—The Bhagavad Gita II:40

In this path (of yoga action) there is no loss of the unfinished effort for realization, nor is there creation of contrary effects.

Even a tiny bit of this real religion protects one from great fear (the colossal sufferings inherent in the repeated cycles of birth and death).

Yoga is the path of spiritual action, the infallible means by which concept is transmuted into realization. For those who embrace this "real religion," there is no waste of any holy effort! The least attempt will be to their lasting benefit. Mathematically certain, right spiritual endeavor to reach God produces only salutary results; whereas material pursuits are like wandering in blind alleys, risking encounters with their unseen hazards.

Poignant reminders abound that it is a surer protection to live under the canopy of truth than to expose oneself on the open fields of error! Even a little practice of the divine method of yoga will bring relief from the dire disease of ignorance and its sufferings. This last sentence of this Gita verse was often quoted by Mahavatar Babaji in referring to Kriya Yoga. 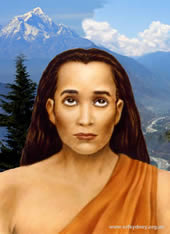 Herein is a message of encouragement to devotees who, having entered the spiritual path, have not yet achieved any noticeable progress. In the material world, all successes are known by their tangible, though often short-lasting, results. But in the spiritual path all results, being primarily psychological, are intangible. They are real, nonetheless, and everlastingly beneficial.

Spiritual results begin as subtle transformations in the consciousness of the inner being. They are to be measured according to their peace-giving qualities. When a devotee meditates deeply, he is bound to feel an ever-increasing peace, which, after all, is more precious than any worldly possession! To maintain the peace within, in spite of the ever-changing circumstances of life, is to be happier than a king, who, amid outwardly favorable circumstances, may be inwardly miserable.

When a devotee advances very far, this inner peace becomes the con-sciousness of omnipresence, omniscience, and omnipotence. The devotee then controls the switch that runs the factory of cosmic creation.

Another interpretation of this stanza is that the correct practice of true yoga can never produce harmful effects; whereas certain formal religious rites calculated to give specific powers, as described in various scriptural texts, may produce no results or wrong results if performed with even the slightest inaccuracy. (pg.270)