You must cease to think you are a mortal being if you would find lasting happiness. Practice this truth in your daily life. It is a battle you have to fight throughout this life and incarnations to come, so it is better to start now! Do not put it off, thinking that you will start meditating tomorrow. Tomorrow will never come. Long ago I passed a whole year in this attitude, and still I was saying, "tomorrow." Then I made up my mind: "I will start meditating today." Since then I have never missed a day.

You must first resolve in your mind the importance of God. You must realize inwardly that He is the greatest need of your life. First practice the presence of God in daily life by making your meditations very deep. It is better to meditate a little bit with depth than to meditate long with the mind running here and there. If you do not make an effort to control the mind it will go on doing as it pleases, no matter how long you sit to meditate. Next,

That is what takes you to His kingdom. Until you learn to practice meditation both long and deep, God will not reveal Himself to you. (jt)

Resurrect your soul from all dreams of frailties. Resurrect your soul in eternal wisdom. What is the method? It includes many things: self-control, proper diet, fortitude, an undaunted mental attitude, and relaxation of the consciousness from body identification by faithful daily practice of scientific concentration and meditation principles. Refuse to be defeated. Do not acknowledge defeat; to acknowledge defeat is greater defeat. You have unlimited power; you must cultivate that power, that is all. (jt)

The Gita points out in its very first stanza the prime necessity to man of nightly introspection, that he may clearly discern which force—the good or the evil—has won the daily battle. To live in harmony with God's plan, man must ask himself each night the ever pertinent question: "Gathered together on the sacred bodily tract—the field of good and evil actions—what did my opposing tendencies do? Which side won today in the ceaseless struggle? The crooked, tempting, evil tendencies, and the opposing forces of self-discipline and discrimination—come now, tell me, what did they do?"

The yogi, after each practice of concentrated meditation, asks his power of introspection: "Assembled in the region of consciousness in the cerebrospinal axis and on the field of the body's sensory activity, eager for battle, the mental sense-faculties that try to pull the consciousness outward, and the children of the soul's discriminative tendencies that seek to reclaim the inner kingdom—what did they? Who won this day?"

Introspection is a wonderful mirror in which to judge oneself. It is of utmost benefit to see oneself in the light of the wisdom of a master, to strive to measure up to the standards of his precepts and ideals. One who corrects himself according to that clear-sighted appraisal will find himself magnetically attractive and widely influential; and, most importantly, pleasing in the sight of God.

To be able to stand criticism is a mark of spiritual strength. It is weakness to allow resentment to conquer one's feelings when criticized. To be able humbly to stand the barbs of criticism, just or unjust, and to make continuous effort to improve one's attitudes and behavior when criticism is justified, will make one a saint.

Forget the past, for it is gone from your domain! Forget the future, for it is beyond your reach! Control the present! Live supremely well now! It will whitewash the dark past, and compel the future to be bright! This is the way of the wise. (...)

A mortal has the consciousness of duality, which seemingly separates the "present" from both the "past" and the "future." Through the operation of the law of relativity or duality that is structurally inherent in phenomenal creation, a mortal man, in a particular body, is convinced that he is living only "now"—as essentially distinguished from a life either in the past or in the future. He is circumscribed by his experience that he, and all his contemporaries, are living only "now."

It Is A Dream

Don’t take life so seriously. This world is a terrible place; there is no safety here. But what are we to do? We must stop talking life so seriously. Delusion can be overcome by holding steadfastly to one philosophy: everything here is nothing more than God’s motion picture.

Don’t make a fuss about anything. Whenever you worry, remember, you are deepening the cosmic delusion within you. It is your own dreams that frighten you. In every form of sense experience you must remind yourself, ‘IT IS A DREAM!’ So don’t be attached to the passing dreams of life. Live for God and God alone. (me p.29)

Therefore, it doesn’t matter whether we scrub floors, or whether we are leaders of great nations; unless we know that we are merely playing a part on the stage of time, we will suffer from the dualities inherent in the consciousness of being identified with these different stations and conditions. Stage actors do not bemoan their particular parts, but enact their roles to the best of their ability, knowing they are temporary portrayals. Do you see? It is only when we take life too seriously that we suffer. 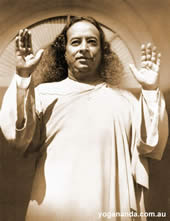 If in a dream you strike your dream head on a dream wall, you will have a dream skull fracture. Wake up and you are healed of your dream injury.

Sri Mrinalini Mata and others were meditating with Yogananda once. After a while he opened his eyes and began to laugh, saying: 'It is such a joke that Divine Mother is playing on you all. You think this is so real!'

Then he looked at the disciples sitting around him, and he said with tears of compassion in his eyes: 'But I feel for you all, because to you, it is yet real. Don't take it so seriously.'

Further reading: The Dream Nature of the World