The Best Quotes by Sri Gyanamata

Do not always ask, ‘What will I get out of it?’ Say instead,

View the plans of the group from the standpoint of the others, not just yourself — remembering that when 'the I, the me, and then mine is gone — then the work of the Lord is done.'

It is a mistake, however, to pity ourselves on account of this suffering, because it is through suffering that we learn and grow. ... "Then glorify it!" That is the point. Since it is suffering that teaches us the truth and turns us toward God, why do we not thank and praise it for the work it does for us?

So beginning at the very first, if anything happened that disappointed me or caused me pain, instantly my soul asked, ‘What did you come here for? Was it honour, distinction, favours, or pleasure?’ As promptly the answer came: "No. For God. For God alone."

I was thinking of something that was coming into my life that filled me with apprehension. I knew that is was not the will of God that I should be saved from the experience. Even at that moment it was moving towards me. Suddenly God told me the prayer He would listen to, and I said quickly: "Change no circumstances of my life. Change me."

Change no circumstances of my life. Change me.

Keep yourself in a positive state of mind constantly, and fill your mind with thoughts of God. Act as you do when you want to make a dark room light. You do not fight with the darkness. You simply bring in the light, and the darkness is dispelled.

When you [Paramahansa Yogananda] visited Ramana Maharshi in South India, in order to draw him out you put to him several questions, one of which was, ‘Why so much suffering?’ He replied by asking, "What suffers?" It is the self, the ego.

"What suffers?"
It is the self,
the ego.

If it did not suffer, would it not grow very strong and powerful? And if I do not die to self, how can I live in God?

There is no pain, nor sense of disappointment, frustration,
or failure that has not its roots in desire.
Put this to the test, and you will see for yourself.

1. See nothing, look at nothing but your goal, ever shining before you.

2. The things that happened to us do not matter; what we become through them does.

3. Each day, accept everything as coming to you from God.

4. At night, give everything back into His hands.

We incarnate here on this plane in order to learn certain lessons, gain necessary experiences, do work we are fitted to do. We take up our appointed positions, and we cannot have what belongs to another. We get our own—neither more nor less. It is only by cooperating with our karma that we find the path of peace and blessedness.

Many there are who put this question. Much time is spent in searching for the ultimate Truth. And yet the blessed fact is: It is ever present with us. It is not here nor there. It is not the exclusive property of any person. It is universal like air and light, and like air and light it does not have to be searched for. As air and light stream into a house through the open windows, so if the windows of the soul are thrown open, Truth will flow in and illumine the man according to his ability to recognize and receive it.

I often think how strange it is that I should have had to come into a Hindu organization in order to understand the meaning and value of Christian teachings. Probably the outstanding Christian teaching concerns the value and necessity of suffering: that without being thrown into a fiery furnace of suffering, we do not attain to union with God. On the contrary, the Hindu teaches that man makes his escape, discovers his own divinity, through the bliss of meditation. Since I have lived and served at Mt. Washington and the Hermitage, these two seemingly contradictory teachings have revealed themselves to me as parts of a whole. Fitted together they form a complete picture of the path man must tread on his upward march.

Lord Jesus said: "Father, save me from this hour: but for this cause came I unto this hour."* [John 12:27] As with him, so with us; how can we expect to escape that which we were born to endure?

The Life of Sri Gyanamata

Sri Gyanamata was born on July 4, 1869. On July 12, 1925 (at the age of fifty six) she met Paramahansa Yogananda. Recognizing the spiritual receptivity Gyanamata had attained through her efforts in past lives, the Guru was able, at that first meeting, to give her the direct experience of God as the great Amen, or Aum, the creative cosmic vibration. 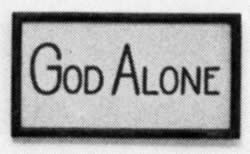 On July 20, 1932, (at the age of sixty-three) Pramahansa Yogananda initiated her into the venerable Swami Order, giving her the monastic name and title, 'Gyanamata'—Mother of Wisdom.

Sri Gyanamata's motto,"God Alone,' hung in her room throughout her years in the ashram; each year, on the anniversary of her taking the final vows of dedication to God, she would inscribe the date on the back of this sign as a renewal of those vows.

On November 17, 1951 (at the age of eighty-two) she left the body in the highest state of samadhi.

When Gyanamata was experiencing severe physical suffering Paramahansa Yogananda wrote to her:

Do not wish to throw away before your time comes what He has given you. Remember what Draupadi prayed to Krishna, ‘Lord, I care not what pain or test of punishment you give me, but do not test me with forgetfulness of Thy love.’ And this is what I pray for you — that you ever remember and love God, and forget the body. Draw closer to the Divine Mother, even if She beats you with pain. As befits your name, keep your gyana, wisdom's light ever burning during the darkness of this test.

Physically, Gyanamata suffered greatly, and through her suffering came great strength. "There is no spirituality without heroism," she wrote. "If I could too soon be released from the furnace of suffering, and admitted into the Temple of Bliss, my character would lack the necessary admixture of steel, which is the product of endurance, and also the means of climbing the heights that tower above me." Perhaps more than anything else, Gyanamata's superhuman endurance proved her complete mastery over this world and its trials. After her passing, Paramahansa Yogananda stated that God had told him:

"Twenty years of suffering never took away her love from Me, and that is what I prize in her life."

The reader may wonder why such a saintly individual had to go through the prolonged suffering that Gyanamata did. Paramahansa Yogananda explained: "Her suffering was because of the sins of many others who became saintly through her life. There was not a sin of her own I could find. I want you to know that. Such is the mystery of God."

That Gyanamata was able and willing to serve others through her own suffering shows the spiritual greatness she had attained. "The metaphysical method of physical transfer of disease is known to highly advanced yogis," Paramahansa Yogananda wrote. "A strong man may assist a weak one by helping the latter to carry a heavy load; a spiritual superman is able to minimize the physical and mental troubles of his disciples by assuming a part of their karmic burdens. Just as a rich man relinquishes some money when he pays off a large debt for his prodigal son, who is thus saved from the dire consequences of his folly, so a master willingly sacrifices a portion of his bodily wealth to lighten the misery of disciples."

At night, just before falling asleep, Sri Gyanamata would turn her gaze inwardly to the sprititual eye and quietly say to God:

Now, Thee alone I seek.
Send what is best.