The Nature of Infinity

O Arjuna! There is nothing higher than Me, or beyond Me. All things (creatures and objects) are bound to Me like a row of gems on a thread. — The Gita VII:7

All finite objects produce the illusion of something beyond them. Therefore mortals ask: "What is beyond the Infinite?" The answer is: Nothing. Naught could be bigger than the Infinite that is the container of all else.

As the thread is hidden behind the beads of a necklace, and as the dreamer's consciousness is secreted behind the garlands of dream images, so the Divine Coordinator remains unseen behind the dream lei of creation. 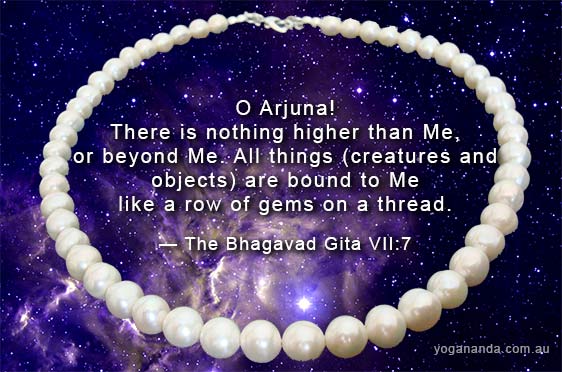 As the thread is the support of a row of beads, and as the dreamer's mind upholds his dream images, so it is God's consciousness alone that sustains all the dream appearances of creation. [God Talks With Arjuna p. 676]