Without shadows as well as light there could be no picture. Evil is the shadow that converts the one beam of God's light into pictures or forms. Therefore, evil is the shadow of God that makes this play possible. The dark shadows of evil are interspersed with the pure white beam of the virtues of God. (dr p.114)

Think of Tamerlane, emperor of India, slaying one million Hindus after his victory. Think of the Aztecs who used to cut out the hearts of their prisoners of war, hundreds at a time, in front of their idol gods. Think of the burning of witches and martyrs under the zeal of the Christian faith. How do despots such as Hitler gain the power to wreak untold horrors on humanity? And what of the war of the Crusades, fought in the name of Jesus' teachings, which stress only love for one's enemies—thousands of priests advocated this war and prayed for the destruction of their enemy brothers and victory for themselves.

Man did not create physical temptation, death-dealing bacteria, natural cataclysms. From the very beginning evil existed to delude man and influence his free choice. How easy it is for the majority of people to be tempted materially, to languish spiritually and do the very things that will hurt themselves. (sc)

Good and evil must ever be complements on this earth. Everything created must bear some guise of imperfection. How else could God, the Sole Perfection, fragment His one consciousness into forms of creation distinguishable from Himself? There can be no images of light without contrasting shadows. Unless evil had been created, man would not know the opposite, good. Night brings out the bright contrast of day; sorrow teaches us the desirability of joy. Though evil must come, woe to him by whom it comes. He who is enticed by delusion to play the villain's part must suffer the villain's sad karmic fate, while the hero receives the hallowed reward of his virtue. Knowing this truth, we must shun evil; becoming good, we ultimately rise to God's high estate—beyond both evil and good.

One who looks from the cinema booth through the beam sees the villain and the hero both as pictures. When one is united with God, then and then only he sees no difference between good and evil. It is therefore dangerous in the mortal state to say there is neither good nor evil. People in the audience who are affected by a gripping picture feel a distinct difference between the villain and the hero! But a discriminating viewer realizes that the role of the villain was created to enhance the nobility of the hero by presenting a contrast of good and evil. When the picture is over, he is through with it; he is no longer affected by any involvement of his feeling with either the villain or the hero. He has risen above his temporary interest in the picture, and he knows that the villain and the hero have no intrinsic meaning; they were only different pictures issuing out of the beam bearing no true relation to himself. (bg)

After learning the lesson of admiring the hero in preference to the villain, one realizes that both good and evil men are creations of the One Beam; as shadows, they have no intrinsic difference. Thus analyzing good and evil, one should try to rise above both, realizing that sin and virtue cannot affect the nondual changeless soul that is made in the image of God. (bg)

"Creation is light and shadow both, else no picture is possible. The good and evil of maya must ever alternate in supremacy. If joy were ceaseless here in this world, would man ever desire another? Without suffering, he scarcely cares to recall that he has forsaken his eternal home. Pain is a prod to remembrance. The way of escape is through wisdom. The tragedy of death is unreal; those who shudder at it are like an ignorant actor who dies of fright on the stage when nothing more has been fired at him than a blank cartridge." (aoy)

In India the most popular quotation from the Bhagavad Gita about the origin of evil is this part of stanza 15: "Wisdom is covered by ignorance; that is why people are deluded." (bg)

The vibration of evil that mankind leaves in the ether upset the normal harmonious balance of the earth. When the earth becomes very heavy with disease and evil, these etheric disturbances cause the world to give way to earthquakes, floods, and other natural disasters. (dr)

An ideal existence is not impossible, but it is for a different time and realm reserved for those who have graduated from the learning assignments of earth life. For the ordinary man in his present stage of evolution, a life without difficulties would be of little value. No lessons of growth would be learned, no transformations of inflexible natures into godly consciousness, no compelling incentives to seek and know one's Maker. (sc) 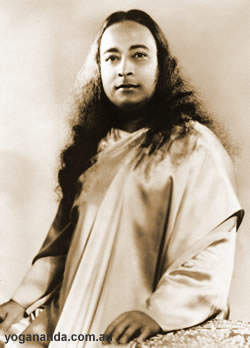