Marriage means unity on the physical, mental, and spiritual planes. If you attract others by spiritual magnetism then you will meet your soul companion. An ideal human marriage is the communion of two souls. But the soul finds the highest communion in God. Unless human love is spiritualized, it will be a canker in your soul. Unless you are spiritually-minded and your mate is the same, you can never be completely happy. (os)

Marriage between man and woman is for the purpose of each partner helping to uplift the other in a commitment of divine friendship, love, and loyalty that will move both souls closer to their true nature in the incarnation they share. And it further provides the medium and right environment to invite other souls seeking rebirth on earth to come into the circle of their expanding love. (bg)

Physical marriage practiced in this world is meant for the self-controlled propagation of the species and for assisting one another to learn the selflessness of love in faithfulness, giving, and sharing; and for the advanced few, it is one means of soul union for liberation after finding the perfect love of God by intense spiritual discipline, sexual sublimation, and meditation. Couples learn many lessons in the marriage partnership, such as uniting feeling and reason (positive and negative) to make two flesh as one through mutual respect and unselfish cooperation. (sc)

Spiritual marriage consisted in the feminine force or feeling uniting with the masculine force or reason and thus becoming whole in oneness with God. The souls that went out of God were to be brought back to God by the process of harmony in body, mind, and soul.

First establish yourself irrevocably on the divine path; then if you marry you won't make a mistake.

Two persons who unite their lives to help each other toward divine realization are founding their marriage on the right basis: unconditional friendship. Woman is motivated primarily be feeling, and man by reason; marriage is meant to balance these qualities.

Success in marriage is very difficult if partners expect too much from their spouses. When each demands fulfillment from the other and that demand is not met, they become enemies. That is why I believe that a lasting and fulfilling marriage is in most cases impossible without spirituality—without a mutual effort to seek satisfaction of the soul's yearning for perfect love and the joy of fulfillment where alone it can be found: God-communion. (sc)

The spiritual purpose of family life is to expand one's consciousness through cultivation of purifying divine love and friendship that is not conditioned by sex or any selfish motivation.

Friendship is vital in a marital relationship. Sex alone will not bring a couple closer together; in fact it will all too soon throw them apart if the higher instinct of true love and friendship is not predominant. When sex is made the most important part of a marriage, the couple lose interest in one another when the initial blush of sensual gratification pales. Those who do not discriminate between true love and sense attraction are disillusioned again and again. (jt)

Errors in choosing matrimonial candidates, divorces, and multiple marriages are frantic misguided efforts arising from the soul's pure desire to find one's real life companion. Selfishness, lust, physical attraction, external beauty, financial lure in marriage, animal magnetism of the opposite sexes—these are the evil forces that misdirect a person from traveling in the right path that leads to the discovery of a proper soul companion. (sc)

Man should strive to see the God in woman, and to help her realise her spiritual nature.

Man and woman should look upon one another as reflections of the Divine.

The sin lies in marrying the wrong person, actuated by social custom or physical instinct. One should get married only when one finds soul unity with a proper mate. And the two thus united in holy vows should remain together, steadfastly loyal to one another. Proper marriage nurtures real love, union on a higher plane, and sublimates the uncontrolled lusts of living on the sex plane. (sc)

Marriage is unnecessary and hampering for those who, renunciants at heart, are intensely seeking God, the Eternal Lover.

People who marry and divorce time and again never give the seeds of divine love a chance to grow on the soil of faithful commitment. The minds of such persons, being concentrated upon sex and physical attraction, remain spiritually fallow. Hence, divorce for flimsy reasons is adulterous behavior as it focuses primarily on sexual gratification as an end in itself. Marriage should be honored by husband and wife as an opportunity for nurturing growth and understanding through mutual exchange of their finest qualities. (sc)

People who want to marry should first have to learn to control their emotions. Two people placed together in the arena of marriage without this training battle worse than opponents in a World War! Wars, at least, come to an end after a time; but some marital partners engage in combat throughout life. (jt)

When the joy of God, felt in meditation with stillness of breath, remains continuously in the soul, then the physical temptation vanishes forever through contrast: The joy in God becomes more tempting than all temptations. One can even love husband or wife with the love of God and not love of flesh, as did Lahiri Mahasaya (my Guru's Guru). His marriage was to show people how the consciousness of God can tame temptation and how God's love can spiritualize and transmute conjugal love. When one is irrevocably established in union with Divine Bliss, that consciousness can exist under all conditions of life. Real freedom can be accomplished in no other way. (sc)

Loyalty and love between husband and wife gradually free the mind from limitation to the sex plane and uplift it to the plane of divine love. When divine love grows out of sex, that supreme love sublimates the sexual appetite into a beautiful human relationship. Sexual gratification alone does not satisfy the heart; without real love, the heart will remain hollow. But if man and woman sincerely share in the marital state the love that rests in the soul, they will find a joyous fulfillment.

One can find this fulfillment in the perfect love of God as well, and to a greater degree. Jesus didn't marry. Many of the greatest saints didn't marry, because they found a higher bliss in communion with God. He who realizes that happiness is the highest goal, and who seeks happiness in God, follows the path of wisdom. (dr)

"He that is unmarried careth for the things that belong to the Lord, how he may please the Lord: but he that is married careth for the things of the world, how he may please his wife." [I Corinthians 7:32-33] I had analyzed the lives of many of my friends who, after undergoing certain spiritual discipline, had then married. Launched on the sea of worldly responsibilities, they had forgotten their resolutions to meditate deeply. To allot God a secondary place in life was, to me, inconceivable. He is the sole Owner of the cosmos, silently showering us with gifts from life to life. There is but one gift man may offer in return - his love, which he is empowered to withhold or bestow. (aoy) 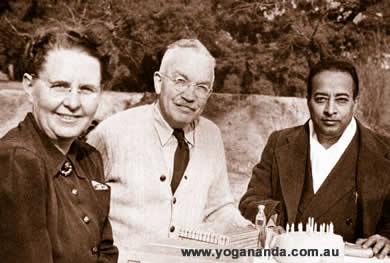