Practice Kriya Yoga, and you will surely succeed on the spiritual path. That is my own experience. The liberating power of Kriya Yoga sunders the prison bars of karma. I have never found in East or West such a great technique as this. Everyone who is a follower of Kriya and of this path of Self-Realization Fellowship will go far ahead. Meditate and see the results in yourself...

The real Kriya Yoga way (life-force control) is not a bypath. It is the direct highway, the shortest route, to divine realization. It teaches man to ascend heavenward by leading the ego, mind, and life force through the same spinal channel that was used when the soul originally descended into the body. (bg p.654)

Pranayama ['control of prana' or energy/life-force that sustains life in the body] is the primary art of realization. You cannot find God unless you can master the mortal breath. Breath ties the mind to the sense plane. As your breath becomes calm, your mind goes within. Breathlessness is the way to God. Practice pranayama and you will know how to meditate—how to perceive God and be one with Him. [Kriya Yoga is the highest pranayama technique.]

Kriya Yoga plus devotion
—it works like mathematics;
it cannot fail.

The science of Kriya Yoga is eternal. It is true like mathematics, like the simple rules of addition and subtraction, the law of Kriya can never be destroyed. Burn to ashes all books on mathematics; the logically minded will always rediscover such truths. Suppress all books on yoga; its fundamentals will be re-revealed whenever there appears a sage with pure devotion and consequently pure knowledge.

Kriya, controlling the mind directly through the life force, is the easiest, most effective, and most scientific avenue of approach to the Infinite. In contrast to the slow, uncertain ‘bullock cart’ theological path to God, Kriya Yoga may justly be called the ‘airplane’ route.

Bliss—which is God, man's ultimate goal—is felt in an intense degree in the practice of Kriya Yoga. The practice of Kriya is far more purely blissful than the greatest enjoyment that any of our five senses or the mind can ever afford us. I do not wish to give anyone any other proof of this truth than is afforded by his own experience. The more one practices Kriya with patience and regularity, the more one feels intensely and durably fixed in Bliss, or God.

The Self-Realization Fellowship meditation technique of Kriya Yoga bases itself on intuition. The more earnest we are about it, the wider and surer will be our vision of Reality—God. It is through intuition that humanity reaches Divinity.

One-half minute of revolution of energy around the sensitive spinal cord of man effects subtle progress in his evolution; that half-minute of Kriya equals one year of natural spiritual unfoldment.

We can know God only by knowing ourselves, for our real nature is similar to His. Man has been created in the image of God. If Kriya Yoga is learned and earnestly practiced, you will know yourself to be a blissful spirit and will realize God.

The ancient yogic technique convert the breath into mind-stuff. By spiritual advancement one is able to cognize the breath as a mental concept, an act of mind: a dream breath.

Master of his body and mind the Kriya Yogi ultimately achieves victory over the 'last enemy,' Death.

After Kriya practice, sit long in meditation with attention fixed at the Kutastha (the Spiritual Eye). The soul-consciousness that usually flows outward into body-consciousness is turned inwardly by Kriya. Then the mind, freed from its attraction to external objects, will experience the wondrous inner world of Spirit.

A devotee's life is never all roses and honey. God tests each one to determine the degree of his devotion. For many latent desires of the past remain buried in the spinal region ready to spring forth when conditions are right. These tendencies must be burned in the fire of meditation. The current which is revolved around the spine while practicing Kriya is so intense that it literally bakes the seeds of karma. So if you practice Kriya regularly, and with ever-increasing devotion for God you will reach the goal in the end.

Every SRF student should remember that Kriya Yoga is a science consisting of various steps, only one of which is that special technique called Kriya Yoga (the particular Kriya Yoga Technique that was taught by Lahiri Mahasaya and is now given through Self-Realization Fellowship).

Get away from this world; not by flying away to a cave in the Himalayas, but to the cave of your mind, where you are free of the body and of the world. Practice Kriya Yoga, and you will surely succeed on the spiritual path. That is my own experience. The liberating power of Kriya Yoga sunders the prison bars of karma. I have never found in East or West such a great technique as this. Everyone who is a follower of Kriya and of this path of Self-Realization Fellowship will go far ahead. Meditate and see the results in yourself after a few years.

As Self-Realization students know, when your spiritual eye is open in meditation, you see the astral light of the spiritual eye as a ring of golden radiance encircling a sphere of opalescent blue, and at the center, a five-pointed silvery-white star. If you can penetrate that star, you are immediately in God's kingdom in the astral world. So learn to concentrate and meditate deeply. Though the spiritual man experiences the physical world and works through the instruments of the physical body, he does not identify himself with any sensation of the body; he is always centered in the spiritual eye. I never take my mind away from there, no matter what I am doing.

When by constant practice of Kriya, the consciousness of this blissful state of the spiritual self becomes real, we find ourselves always in the holy presence of the blissful God in us.

The principles of Kriya Yoga, therefore, are not the formula of a sectarian rite, but a science through the application of which the individual may realize how his soul descended into the body and became identified with the senses, and how that soul may be withdrawn from the senses and reunited with Spirit by a scientific method of meditation. This route of descent and ascension is the one universal path that every soul must travel.

Only those who have acquired great good karma through the good works of many incarnations are drawn to the path of Kriya Yoga. They are blessed who have learned this technique.

It is not the technique of meditation alone that will bring you freedom; your character must be strong and pure. Your whole life and behavior must be in harmony with the laws of truth. The first rules of the yoga path of meditation are

1. & 2. You should follow: purity, evenminded contentment, introspection (self-study), devotion to God, and self-discipline. To progress in meditation, you must be working to free yourself from pride, wrath, greed, jealousy. [yama & niyama]

3. The body must be under your control in order to meditate deeply. [asana]

4. Then comes pranayama (control of prana or life force), techniques for calming the body and mind, breath and heartbeat. Pranayama is the primary art of realization. You cannot find God unless you can master the mortal breath. Breath ties the mind to the sense plane. As your breath becomes calm, your mind goes within. Breathlessness is the way to God. [Kriya Yoga is the highest pranayama technique.]

5. The consciousness is turned within, away from the senses. [pratyahara]

6. When your attention is freed from distractions of breath and body and outer sensations, it is able to focus single-pointedly on God. [dharana]

7. In the inner stillness, one hears the mighty voice of Spirit as Aum... As you listen to and merge in that great, comforting Cosmic Vibration, the consciousness expands with it into all space. [dhyana]

8. And as the concentration and perception of meditation becomes deeper, one reaches the ultimate state, samadhi, in which the meditator, the process of meditation, and the object of meditation (God) merge in oneness. In samadhi, you know by direct experience that God and you are One. [samadhi] 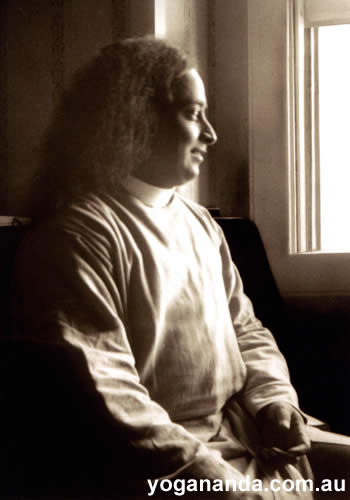