What is Maya? — Summary

In order to give individuality and independence to Its thought images, Spirit had to employ a cosmic deception, a universal mental magic. Spirit overspread and permeated Its creative desire with cosmic delusion, a grand magical measurer described in Hindu scriptures as maya (from the Sanskrit root ma, "to measure"). Delusion divides, measures out, the Undefined Infinite into finite forms and forces. The working of cosmic delusion on these individualizations is called avidya, individual illusion or ignorance, which imparts a specious reality to their existence as separate from Spirit.

Even though God has created the universe out of delusion, He Himself is not deluded by it. He knows maya as naught but a modification of His one Consciousness. The colossal dramas of creation and dissolution of planets and galaxies; the birth, growth, and decline of empires and civilizations; the countless miniature plays of individual lives with their subplots of health and sickness, riches and poverty, life and death—all are happening in God as the One Dreamer-Creator, a chimerical perception of change within the Eternally Changeless. One part of the Infinite Being ever remains transcendent, beyond vibratory dualities: There He is the inactive Absolute—Spirit. When Spirit vibrates Its consciousness with thoughts of diversity, It becomes immanent as the omnipresent Creator in the finite vibratory realm of infinity: There God is active as the creative Vibratory Holy Ghost with its immanent Christ Consciousness. (The Second Coming, p.140)

Thus, Spirit first gave rise to a Magic Delusion, Maya, the cosmic Magical Measurer, which produces the illusion of dividing a portion of the Indivisible Infinite into separate finite objects, even as a calm ocean becomes distorted into individual waves on its surface by the action of a storm. All creation is nothing but Spirit, seemingly and temporarily diversified by Spirit's creative vibratory activity. (The Second Coming, p.9)

Newton's Law of Motion is a law of maya:

"To every action there is always an equal and contrary reaction; the mutual actions of any two bodies are always equal and oppositely directed."

"To have a single force is impossible. There must be, and always is, a pair of forces equal and opposite."
(Autobiography of a Yogi)

Spirit alone is perfect. Everything in creation, being delimited, is imperfect. The very beginning of creation gave rise to

the law of duality—light and darkness, good and evil—

the law of relativity necessary to divide the One into the many.

If someone sees an elephant moving around in the air, it would be said that what he is seeing is an illusion or hallucination; but to him the perception is real. Maya is the mass hypnosis of God by which He makes every human being believe in the same illusory "reality" of creation as perceived by the senses; avidya gives individuality of form, experience, and expression (it supports the ego or I-consciousness). (from The Second Coming of Christ)

Naught could exist without Prakriti's power of maya. The beam of light from the projector's booth cannot alone create a motion picture; a film of mingled shadows and transparencies is also needed. Similarly, the Lord assumes two aspects, Purusha or the undistorted light of Kutastha Intelligence, and Prakriti with its maya-film of shadow relativities, to project the intelligently organized drama of countless worlds and beings. Through the two divine agencies He produces in cosmic cycles throughout eternity the dream motion-picture of creation.

Prakriti, God's Maya, is the Lady of Phenomena, the Mistress of Illusion, the Director of the phantasmagoria of the unfolding universe. What a mysterious magic is her power—secret in its workings, bold in its displays. Prakriti means "that which can work superbly." Gazing around at the panorama of her inexhaustible handiwork, who could dispute the aptness of her Sanskrit name?

As the ocean with waves and without waves is the same ocean, so Spirit, with or without creation, is ever a unity. Prakriti is the storm of may a, delusion, relativity, that transforms the surface of the calm ocean of God into tumultuous waves of human lives. The vibratory storm of relativity is God's desireless desire to create. (p.889 God Talks with Arjuna)

Maya is a cosmic hypnosis that veils the Singular Reality and imposes the suggestions of manifestation. The cosmic consciousness of the One Perceiver, experiencing these transformations of maya, becomes correspondingly individualized as many souls. The soul, experiencing and interacting with the workings and manifestations of cosmic maya, has its own identity, or avidya, individual delusion, and thereby becomes the body-identified ego. Like its essence, Spirit, the soul is ever pure and unchanged. But when expressing outwardly, it is subject to the laws, or principles, of manifestation. Attuned to the divine intelligence of the indwelling soul, the resultant being is pure, noble, and wise. But the more the consciousness yields to the tangled interworkings of Nature operating through the sensory mind, the more limited and deluded the ego becomes. But even if it sinks to the depths of ignorance and evil, the consciousness never loses its divine soul potential. Eventually, the inner magnetism of Spirit will cause that individualized consciousness to seek the way to ascension through the choice of right action that links it to the uplifting divine power inherent in Nature's laws.

A hypnotist may suggest to a subject that he is seeing a ferocious tiger. The subject sees the beast and shrieks in terror. Now the hypnotist only suggested the vision of the tiger, but did not ask the subject to be afraid of it. The fear that the subject felt was self-suggested and came from his own being, from the potentials of emotion and experience within him. Similarly, God, the Master Hypnotist, through His power of maya has suggested to individualized souls to visualize the universe with all its intricacies and details. The perceptions of individualized consciousness, being personalized by avidya (individual delusion), become elaborated by feeling. Under the influence of the sensory mind, feeling expresses itself as emotions—such as fear, attachment, repulsion, desire. The Master Hypnotist did not suggest that individualized souls be afraid or courageous, miserable or happy. These are their own creations.

Ideas are finite; they are fleeting, moving along and changing in time and space. But their underlying substance, the enduring consciousness of one's existence, which perceives and cognizes the ideas— and which carries on the diverse operations of willing, imagining, remembering them—is constant. As ego, manipulated by the sense mind, it reacts emotionally and unwisely in response to the circumambient relativity. But when the consciousness is freed from the workings of Nature's phenomena, it shines forth as the soul, the perfect reflection of the omnipresent, omniscient Spirit. Thus is the One in the many, and the many in the One. Both exist, but as eternal and relative states of the One Consciousness. (God Talks with Arjuna, p.878 )

This world of mortal beings does not perceive Me, unchangeable and beyond all qualities, because they are deluded by the triple modes of Nature.

It is difficult indeed to go beyond the influence of My divine cosmic hypnosis, imbued with the triple qualities. Only those who take shelter in Me (the Cosmic Hypnotizer) become free from this power of illusion.
—The Bhagavad Gita VII:13-14

The cosmic-dream delusion is imposed like a hypnotic spell on men from their birth; they remain unaware of its insidiousness. If God made His supreme blessedness evident to all men (as He does to the tested and victorious supermen), they would not be influenced by the lesser lures of the senses. God, the perfect ever-new unending Bliss, is the greatest temptation to the soul of man. Therefore He tests His children first with inferior temptations of the senses; when man has rejected those in a proper spirit of wisdom, the superior divine treasures are revealed to him. (God Talks with Arjuna, p.684) 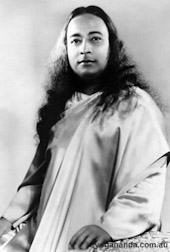