Brahman (God) is All

The process of offering and the oblation itself—both are Spirit. The fire and he who makes oblation into it are other forms of Spirit. By realizing this, being absorbed in Brahman (Spirit) during all activities, verily such a one goes to Spirit alone.
—The Bhagavad Gita IV:24 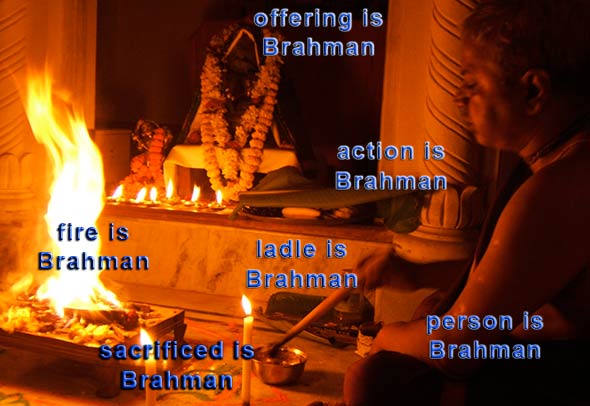 All manifestation is a variegated ritual of the one Cosmic Consciousness of God. The personal soul (atman) is not different from the Universal Soul or God (Paramatman); thus, it is He who is the Giver and the Acceptor of all sacrifices (activities). It is also He who is the oblation—the objects involved in the rite. The yogi, by realizing this, enters samadhi or oneness with God.

When a person fully wakes from a dream, he realizes that its seeming physical and psychological manifestations were mere textures of dream-stuff. Similarly, when a yogi fully wakes from the cosmic dream by becoming one with God, he realizes that all the subjects, objects, and activities in the cosmos are results of one Cosmic Consciousness. Seeing the cosmos as a dream motion picture of God, he beholds the offering of his life itself as Brahman, and also the fire of Cosmic Life in which his life is given as an offering, as Brahman. He finds the Lord of this Cosmic Fire Ceremony and of all activities that are connected with it (the externalized expressions of Cosmic Consciousness) to be Brahman.

By the inner illumination of divine awakening, the yogi ceases to be a mortal being with gross perceptions of the universe; he realizes that the whole cosmos is a cosmic motion picture. His body is only “a dream walking.”