The illustration of an unflickering flame of light in a mindless spot may be used in reference to a yogi who has conquered his feeling (chitta) by the practice of meditation on the Self. (19)

The state of complete tranquility of the feeling (chitta), attained by yoga meditation, in which the self (ego) perceives itself as the Self (soul) and is content (fixed) in the Self; (20)

The state in which the sense-transcendent immeasurable bliss becomes known to the awakened intuitive intelligence, and in which the yogi remains enthroned, never again to be removed; (21)

The state that, once found, the yogi considers as the treasure beyond all other treasures—anchored therein, he is immune to even the mightiest grief; (22)

That state is known as yoga — the pain-free state. The practice of yoga is therefore to be observed resolutely and with a stout heart. (23)


(Stanza 19) To keep a candle flame unflickering, it must be sheltered from any breeze. Similarly, the flame of the yogi's meditation-born perception must remain steadily burning, undisturbed and unwavering before the gusts of delusion-impassioned feeling. A yogi who thus guards the flame of peace from the onrush of momentary desires and innate likes and dislikes arising from an uncontrolled restlessness in his faculty of feeling (chitta) discovers in that tranquil light the secret presence of God. As a flickering light cannot distinctly reveal the outlines of objects near it, so the spiritual perception of a yogi who is agitated by material desires does not reveal within him the clear presence of the Divine.

Stanzas 20 and 21 describe the four states of primary ecstasy attained by the yogi in the advanced stages of yoga (in samprajnata or savikalpa samadhi), which in turn lead to the highest samadhi (asampra-jnata or nirvikalpa samadhi) the ultimate union referred to in stanza 23 as "the pain-free state."

In the first state of primary ecstasy, the body-identified ego in meditation meets its true Self, the soul; it begins to taste the blessedness of the bliss of the soul and becomes "content" (concentrated, fixed) in the joy of that nature.

As a result of that one-pointed concentration, the yogi attains the second state: "complete tranquility of the feeling." His attention, intellect, and feeling (operative in the savikalpa states of savitarka, savichara, and sananda samprajnata samadhi) have become entirely divorced from their sense-identified gross functions, and in their subtle nature are anchored in the bliss of the soul (in the sasmita state of pure individualized being). When the external activities of the faculties of intelligence are arrested and the cognitive instruments turned within, the intelligence then draws its knowing power from the intuition of the soul. In this sense-transcendent state, the inner bliss is thus "known to the awakened intuitive intelligence." Discovering the soul, the yogi also begins to perceive within his being the bliss of the Omnipresent God. After the physical ego metamorphoses into its true Self, the soul, then the bliss of the soul expands and merges into the greater bliss of the Spirit.

In the third state, the yogi experiences not only intermittent ecstasy, but finds his cosmic contact existing permanently beneath his consciousness, to be enjoyed anytime he enters the savikalpa samadhi state. The last state of the fourfold primary ecstasy is attained when the yogi becomes absorbed in the Cosmic Bliss not only in the meditative state of samadhi, but also when he is able to bring his divine perceptions with him when he returns to the conscious state of bodily activity. He is gradually able to hold on to these aftereffects of samadhi for longer and longer periods, during which he is undisturbed by any "pain"—the evil effects of Nature's alternating conditions of duality. When he can remain perpetually in that pain-free state, he is spoken of as having mastered all four states of primary ecstasy.

He then passes on to the state of the secondary or the highest ecstasy (asamprajnata or nirvikalpa samadhi). He becomes one with Spirit —"enthroned, never again to be removed"—never again to come down to the painful sphere of body identification.

Even in the fourth state of the primary ecstasy, complete liberation from physical and mental pain is not possible, owing to the soul's being conscious of the body and manipulated by its faculties as soon as any diminution occurs in the yogi's perception of divine bliss. The highly advanced yogi may experience brief periods of nirvikalpa consciousness (asamprajnata) even before becoming permanently established in that state. (pg.625-627)

The Gita points out the impossibility of attaining satisfaction by practising yoga methods desultorily.

Again, the yogi should not be satisfied by deep meditations for one or two years, but should practice yoga with ever-increasing intensity to the end of his life, and for incarnations if necessary! Better it is to try to be free in one life or in a few lives than to undergo the suffering of thousands of incarnations, owing to lack of continuous efforts for salvation. The yogi who is not determined to meditate until final emancipation is achieved (by the removal of all seeds of karma lodged in the subconsciousness) is apt to be discouraged and to give up his yoga practice because he has not quickly found the ultimate state. He should, however, intensely meditate without concentrating on the fruits of his actions.

A man planted a flower seed in his garden. He looked after it, steadfastly weeding and watering the soil around it. A robust plant appeared—but, for years, no flower. He thought of destroying the plant, but finally decided: "My business is to look after the plant; it is for God to produce the flower. I will keep myself busy in tending the plant and not in concentrating on my flowerless labors." Years passed; he contented himself with the care of the plant and forgot all about the flower. One sunny morning, when a breeze was gently blowing, he smelled a strangely attractive fragrance. He ran to his plant and stood speechless in joy—there in front of him was the gorgeous flower! The aromatic beauty had always been present in the plant, a hidden potential awaiting the right moment of blossoming made possible by his labor of love. 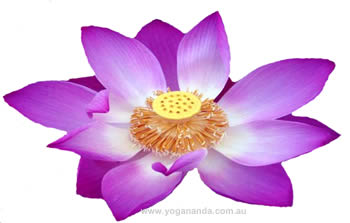 The yogi should similarly keep himself busy nurturing his plant of Self-realization; if he is not impatient, he will find (one day when, God in His infinite wisdom deems it proper) the amaranthine* flower of eternal freedom. (pg.628)