Sound Is the Most Powerful Force in the Universe 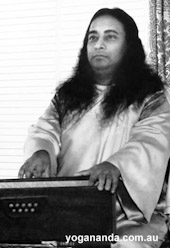 Sound or vibration is the most powerful force in the universe. Music is a divine art, to be used not only for pleasure but as a path to God-realization. Vibrations resulting from devotional singing lead to attunement with the Cosmic Vibration or the Word. "In the beginning was the Word, and the Word was with God, and the Word was God."—John 1:1.

Singers of Cosmic Chants who want the best results should chant them alone or with true devotees of God, with ever increasing devotion and fervour. After the notes are learned, one's undivided attention should be given to repeating them with deeper and deeper devotion, striving fully to understand the meaning of the words in the chant, until one is immersed in the bliss of singing. This joyous feeling is the first perception of God.

Words that are saturated with sincerity, conviction, faith, and intuition are like highly explosive vibration bombs that have power to remove the rocks of difficulties and to create the change desired.

The five states of chanting are:

Subconscious chanting becomes automatic, with internal consciousness only, when the mind effortlessly repeats a chant in the background of one's thoughts and activities.

One of the Ten Commandments in the Bible is: "Thou shalt not take the name of the Lord thy God in vain." Whenever one repeats a chant or prayer absentmindedly, without complete attention on the Lord, one has taken the Divine Name in vain; that is, without result, without utilizing the omnipresent power of that Name, and without receiving God-response. The Lord does not answer such parrot prayers. To repeat a chant with ever increasing understanding and devotion is to take the Name of God, not in vain, but effectively.

One who sings these spiritualised songs, Cosmic Chants, with true devotion will find God-communion and ecstatic joy, and through them the healing of body, mind, and soul.

Each of these chants [in Cosmic Chants] should be sung not once but many times, utilizing the cumulative power of repetition, until the singer feels great bliss wafting through the "radio" of his heart. When this joy is felt it is proof that God has answered the singer, and that his devotion has been properly tuned; the broadcasting of his ardor in chanting has been true and deep.

He who chants these songs with great devotion, in solitude or in congregational singing, will later discover that the chants are repeating themselves in the subconscious background of his mind, bringing an ineffable joy even while he is in the thick of the daily battle of activity.

Each devotee should set aside a regular time for singing these songs. Chant first aloud, then whisperingly, then mentally. A group, gathered together in the Name of God, should choose one of these chants and sing it with piano or organ accompaniment, then more slowly, then in a whisper without any accompaniment, and finally mentally only. In this way deep God-perception can be obtained.

Devotees should end all periods of meditation or chanting by intoning Om in the manner shown by the musical arrangement above.

The chanting of Om (Aum), from which the word Amen derives, is similar to the practice in Western churches of intoning Amen one or more times at the conclusion of a hymn.

Aum is the basis of all sounds. The Aum of the Vedas became the sacred word Hum of the Tibetans; Amin of the Moslems; and Amen of the Egyptians, Greeks, Romans, Jews, and Christians. Amen in Hebrew means sure, faithful. Aum is the all-pervading sound emanating from the Holy Ghost (Invisible Cosmic Vibration; God in His aspect of Creator); the "Word" of the Bible; the voice of creation, testifying to the Divine Presence in every atom. Aum may be heard through practice of Self-Realization Fellowship methods of meditation.

"These things saith the Amen, the faithful and true witness, the beginning of the creation of God."—Revelation 3:14.

Intone the first Om with full voice, concentrating on the physical creation as epitomized in the human physical body; the second Om, representing the astral or electronic sphere of creation, should be sung more softly, with thought concentrated on the astral creation as epitomized in the electrical energies in the human body; the third Om, representing the causal sphere of creation, should be sung quite softly, with the mind interiorized on the causal creation epitomized in man's own power of creative thought.

Repeat the chant again and again with deep attention and devotion. Always try to listen for the real Om sound, which is an astral vibration and is only symbolized in the vocal sound of Om that you are chanting.