First, Know Yourself as Soul

2. First, Know Yourself as Soul

The soul, in essence the reflection of Spirit, never undergoes the pangs of birth nor the throes of death. Nor having once been projected from the womb of immortal Spirit will Prince Soul, on return to Spirit, lose its individuality; having entered the portals of nativity, its existence will never cease. In all its bodily births, the Spirit-soul never felt birth; it exists everlastingly, untouched by the maya-magic fingers of change. It is ever the same—now, past, future—as it has always been; ageless, unchanged, since its immemorial beginnings. The deathless soul dwelling in the destructible body is ever constant through all cycles of bodily disintegrations; it does not taste death even when the body quaffs that fatal cup of hemlock. (bg)

You are soul. You can consciously know your soul—your true self—by meditation. And when you know yourself as soul you will have discovered the presence of God within you. (me)

All great teachers declare that within this body is the immortal soul, a spark of That which sustains all. He who knows his soul knows this truth: "I am beyond everything finite; I now see that the Spirit, alone in space with Its ever-new joy, has expressed Itself as the vast body of nature. I am the stars, I am the waves, I am the Life of all; I am the laughter within all hearts, I am the smile on the faces of flowers and in each soul. I am the Wisdom and Power that sustain all creation." (me)

By the transcendental way [by the deep esoteric meditation] you realize all the things you are not, and discover That which you are:

When you go beyond the consciousness of this world, knowing that you are not the body or the mind, and yet aware as never before that you exist—that divine consciousness is what you are. You are That in which is rooted everything in the universe. (me)

The true seer perceives his soul as the silent witness, aloof from the body—the microcosm created by the cosmic vibratory force, Prakriti or Mother Nature. She alone is the performer of all physical and mental activities. The soul is actionless, the reflection of the transcendental, nonvibrational God the Father beyond creation. (bg)

(21) The aforesaid Unmanifested, the Immutable Absolute, is thus called the Supreme Goal. Those who attain it. My highest state, undergo no more rebirth.

(22) By singlehearted devotion, O son of Pritha (Arjuna), that Supreme Unmanifested is reached. He alone, the Omnipresent, is the Abode of all creatures.
—The Bhagavad Gita VIII:21-22

The sole gift a human being may present to the Infinite Giver is love. To bestow that gift on God, or miserly to withhold it, is man's only private power. All else already belongs to the Maker of heaven and earth. By pure humble bhakti man becomes fit to enter even the ultimate haven, the Immutable and Unmanifested. (bg) 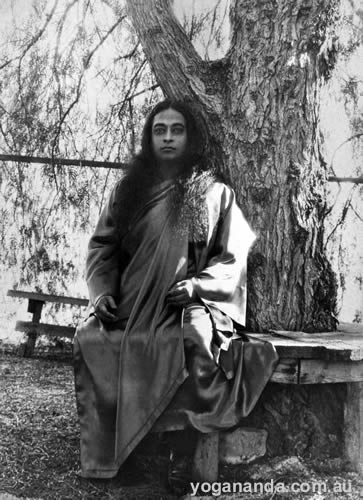