Mind passes along with the life current from the brain through the spinal centers and then into the many branches of the nervous system and the innumerable cellular points of perception. The ordinary mind is therefore spoken of as being concentrated on the many points of the flesh; it is entangled principally in sensations in the sensory tracts.

When the Kriya Yogi withdraws his mind and life force and gathers them together to be concentrated at one point, in the single eye, he begins to look into the omnipresent sphere of the Infinite.

This is what is meant by making the mind one-pointed, the "single-eyed" vision referred to by Christ. When the yogi meditates more deeply, he finds his mind automatically concentrated at the one point of the spiritual eye, in ecstasy with the Lord.

In the beginning, the devotee by meditation succeeds once in a while in quieting the mind. By deeper progress he finds that half of the time his mind is concentrated on the Divine, and half of the time scattered in bodily and material perceptions. By further spiritual development he remains in a state of continuous and one-pointed concentration, very seldom experiencing restlessness. In the final or nirudha state (his consciousness fully liberated from body identification and ascended into Spirit) the yogi becomes permanently one with the Absolute.

In this stanza the Gita points out that, during the effort of being one-pointed, the yogi will be unsuccessful unless he can by concentration withdraw his attention (manas, mind) from the activities of the life force in the various senses.

Otherwise, he will be constantly distracted by restless thoughts—the mental concepts formed from sensory stimuli by the "fanciful faculty" of feeling (chitta). The devotee who sits in a good posture and meditates at the point between the eyebrows learns to practice yoga, the uniting of ego and soul; in deep concentration, he finds his mind and heart (chitta, feeling) free from sensory distractions and emotional likes and dislikes. With the mergence of the ego into the taintless soul, he engages in the ultimate "self-purification."

Key to Meditation:
Concentrating at Point Between the Eyebrows

Firmly holding the spine, neck, and head erect and motionless, let the yogi focus his eyes at the starting place of the nose (the spot between the two eyebrows); let him not gaze around in various directions.
—The Bhagavad Gita VI:13

A majority of gita translators and commentators have misinterpreted the word nasikagram to mean "tip of the nose." The word literally means "origin of the nose." The origin or starting place of the nose is the spot between the two eyebrows, the seat of spiritual vision. ...

Meditation involves the withdrawal, through the spine,
of life current from the sensory nerve branches, and
the concentration of that accumulation of life force
within the spherical spiritual eye.

A straight spine and erectness of the neck and head are important in effective meditation. If one adopts an improper posture—his body bent, or his chin tilted up or down—his crooked vertebrae pinch the spinal nerves. This pressure obstructs the reversed flow of mind and life force from the sensory channels to the brain; there is then no reinforcement of the power of the inner telescopic eye to perceive Omnipresence. 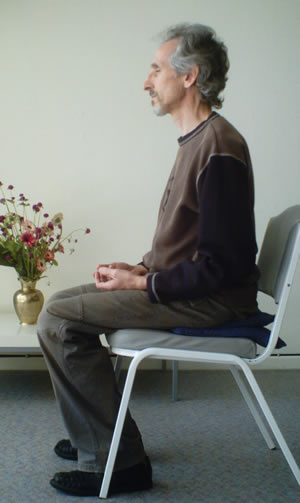 One should sit in a comfortable posture with the spine erect. The lumbar region of the spine (opposite the navel) should be gently crooked forward, the chest up and shoulders back (which places the inner edges of the shoulder blades closer together). Each hand, palm upturned, should be put on the corresponding thigh at the juncture of the thigh and abdomen to prevent the body from bending forward. The chin should be parallel to the floor. While maintaining this correct position, undue tension in the muscles should be relaxed. When the yogi holds the spine in the form of a bow by the above-mentioned posture, he is ready successfully to engage his reversed mind and life force in a battle with the outwardly pulling senses. Without any strictures or pinching of the spinal I nerves, the mind and life force are easily directed upward by the yogi. ...

As one switch pours through two channels one electric current into two headlights of an automobile, so the one medullary astral eye of light supplies the two human eyes with two lights—a forked light. This gives the delusive dual and dimensional perception of matter. Thus focused outwardly, the eyes are ordinarily constantly oscillating. The ego directs the two optic searchlights into various angles according to its psychological inclinations. ...

In the concentrated state of superconsciousness, that angle of vision is at the point between the eyebrows (the natural seat of will and concentration, and of divine perception, in the body). The aspirant who wants to produce the superconscious state, characterized by conscious relaxation of life energy from

the senses, must learn to fix his eyes and their gaze at this center. When the gaze of the two eyes is concentrated at the point between the eyebrows, the dual currents flowing from the medulla into the two eyes reunite, and the yogi sees at this center the spiritual eye of three colors—a reflection of the actual luminous eye in the medulla oblongata. The illumination of the spiritual eye by this reversal of life force in the two eyes exerts a strong pull on the life force throughout the body. The senses, which were projected outside to cognize matter, are recalled within to concentrate on the source from which all the powers of the senses and mind flow.

This Gita stanza therefore advises the devotee of the necessity of concentrating the light of the two eyes at the point between the two eyebrows, at the origin of the nose, as a prime requisite of yoga meditation.

The single eye of light reflected in the forehead from the medulla is the astral eye of intuitive omnipresent perception.* when the light of the two eyes is concentrated between the eyebrows as a single reinforced light, the yogi can see his body as made of the light that emanates from God. The soul uses the spherical astral eye of intuition to perceive Cosmic Light and Cosmic Consciousness. (bg p.608) ....

It requires time and calm practice to steady the light of the intuitive astral eye. It takes deeper and longer practice to see the star. It requires greater realization to hold the perception of the star. And it takes mastery in meditation to march the consciousness, valiantly triumphant, through the starry gate of light. ...

By deeper concentration and meditation, the spiritual eye of intuition opens, and through the wisdom star the yogi becomes united to the Christ-Krishna Omnipresence; and thence, in deepest ecstasy, he reaches the Cosmic Consciousness of Spirit. ....

Ordinary individuals who yearn to get rid of the obnoxious trials of the conscious life cannot go at will to the subconscious state of restful sleep or to the blissful superconscious state, owing to habits of worry and to lack of control of the life currents in the eyes and the vision, and in the mind behind them. But the yogi learns by closing the eyes, and relaxing the gaze, to sleep at will; by keeping them open, gazing straight ahead, he learns to remain awake indefinitely. Holding his eyes half open and half closed, and concentrating at the spiritual eye, the devotee can at will, and for as long as he chooses, enter and remain in a state of superconscious ecstasy. Thus just by opening or closing his |feyes or keeping them half open, the advanced yogi can transfer his concentration at will from the physical world to the subconscious slumberland or to the superconscious state. Summoning or dismissing these states at will, he becomes master of the conscious, subconscious, and superconscious worlds.

As the devotee progresses in meditation from restless consciousness to cosmic consciousness, his conscious and subconscious thoughts may materialize in his inner vision, weaving figures of light, like those seen in movies, both real and unreal—materializations of the will and life energy. Beware, young devotee, of these fairies of the world of life energy. Be not satisfied with anything less than Spirit and the bliss of Spirit. Pay no attention to variations of the inner light, but practice concentration on the light of the spiritual eye. The light of the eye must be used only to look for God, the One whose presence is hidden on the throne of light. (bg p.612)